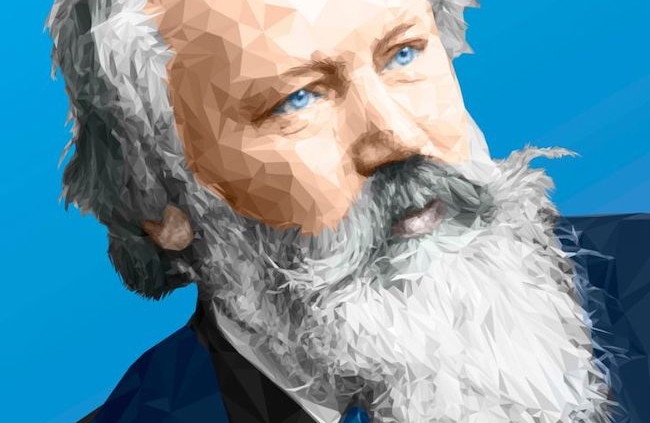 For the next concert Firebird turns its hand to the First Symphony of Brahms which has lasted through the centuries thanks to its verve, freedom and complexity. But it didn’t start off quite like that…

It was around 1854 when Brahms began sketches for a Symphony in D minor. But it soon underwent radical change until it was finally recast as his first Piano Concerto in D minor. Nevertheless there was great expectation that Brahms should compose a symphony. The music of Beethoven cast a long shadow over the 19th century and audiences saw Brahms as his natural successor.

So producing a symphony which could continue that legacy brought with it perhaps unrealistic demands on a young composer in his early twenties, understandably in awe of producing a symphony of commensurate dignity and intellectual scope as any of the nine symphonies of Beethoven. In addition, Brahms was fastidiously self-critical of his work which led him to destroy many of his early compositions.

It was not until 1868 when Brahms began to see the final structure of his First Symphony taking shape. In September of that year, he sent a card to his lifelong friend Clara Schumann sketching the Alphorn tune from the Finale with the message ‘Thus blew the shepherd’s horn today!’

Yet progress was still slow and the Symphony would not premiere for another eight years. In 1873, the success of his Variations on a theme by Haydn for orchestra brought the composer a new burst of encouragement and he cautiously started to continue the work he had started years before. Schumann had also been encouraging him from the sidelines saying that all his friends had awaited this work for decades.

It was to take Brahms until he was 44 before his First Symphony would eventually be premiered on 4 November 1876. But even after the premiere Brahms was apprehensively planning five more trial performances before he could be completed satisfied.

The conductor for the Symphony’s premiere, Hans von Bülow, referred to it as ‘Beethoven’s Tenth’. There are indeed a few quotes and references to Beethoven if you listen carefully, but it’s more in the style of a homage. As Brahms himself commented, ‘any ass can see that.’

Join London Firebird Orchestra in the spectacular central London venue of St George’s Hanover Square for a wonderful evening of music including this great works from the very heart of European classical music.

Due to unforeseeable circumstances, we are sorry to announce that Aleksei Kiseliov is unable to be with us at this concert. Aleksei has longstanding and very close links with the orchestra and we are sure that he will be joining us at a future concert soon. He is very sorry not to be able to perform at our next concert.

On a very happy note however, we are delighted to confirm that the legendary cellist Raphael Wallfisch has kindly agreed to join us in the performance of the Schumann Concerto. The orchestra performed with the celebrated Maestro in 2015 and we are honoured to collaborate with him once again with this concert.