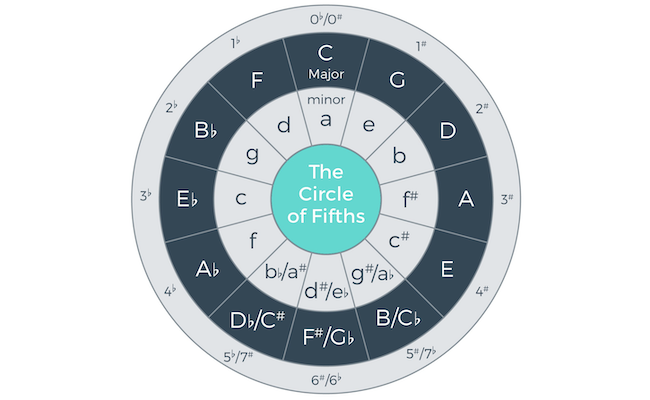 London Firebird Orchestra’s fantastic new season is ‘bookended’ by two concerts featuring music is specific keys. But what does this actually mean?

On Thursday 26 September 2019 Firebird presents A Major Evening with music by Beethoven and Mozart – and predominantly in the key of A Major.

Buy tickets for A Major Evening

B MINOR WITH LOVE

Thursday 11 June 2020 sees B Minor with Love, with music by Dvorak and Tchaikovsky – and centred around the key of B minor.

In music, the key of the piece is the group of notes or scale which form the basis of the composition. Each key has certain characteristics which differentiates it from another.

Western music is usually grouped into two types – Major and Minor – although there are many other types or ‘Modes’ used in different musical styles around the world.

Science laboratories throughout the country will probably have a periodic table on the wall. Music classrooms will have something equally daunting to the uninitiated – The Circle of Fifths.

It all goes back to the Ancient Greeks and Pythagoras in 600BC. He had been experimenting with different lengths of vibrating string and had discovered the relationships between pitch frequencies.

He defined one of these relationships the octave and divided it up into twelve steps. This was what we call a scale. On a piano it is easy to see with a mixture of black and white keys:

This developed into the Pythagorean Circle and the version we have today – the Circle of Fifths – is like a map of the keys. Starting at the top in C major and moving clockwise, the adjacent keys are the most similar to each other with each one having an additional sharp (a step higher).

As you go round the circle counter-clockwise you keep adding flats (a step lower). Nestled snugly inside the major circle you find the relative minor keys which have all the same sharps of flats as their major counterparts.

Buy tickets for A Major Evening

But of course, understanding the cycle of fifths has absolutely no bearing on the enjoyment of this wonderful music – and this years season truly is a feast for the senses. We do hope you can join us for the opening concert of the season on Thursday 26 September for A Major Evening.

Meet the Soloist
Scroll to top