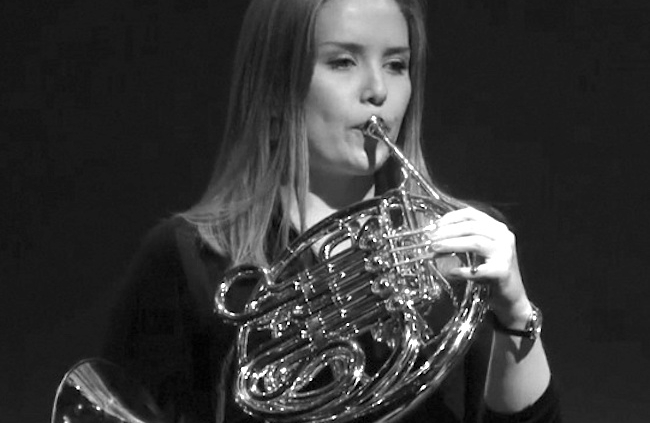 French Horn player Helena Jacklin began performing with the London Firebird Orchestra in February this year. Several concerts later we find out more about her career in music…

Buy tickets to our next concerts

Tell us a bit about yourself, your instrument and your training to date…

I began the horn at the age of nine and soon after gained a scholarship to study at the Purcell School of Music with Sue Dent, supported by the government’s Music and Dance scheme. I was then awarded a scholarship by the Royal College of Music in 2011 as holder of the Michael Quinn Award. I graduated with a First Class Bachelor of Music (Hons) degree.

My studies continued as holder of the Oliver Green Memorial Trust Award and as part of the Martin Musical Scholarship Fund of the Philharmonia Orchestra. In 2017 I graduated with a distinction in Masters in Performance.

Can you say more about your involvement in orchestral playing?

I see myself primarily an orchestral musician and have performed with orchestras such as the Philharmonia Orchestra, Orchestra of the Royal Opera House, Bournemouth Symphony Orchestra, RTE Symphony Orchestra and London Concert Orchestra, among others. I was a member of the Southbank Sinfonia in 2018 and am currently on trial for Principal Horn of the Scottish Ballet.

I am also active in chamber music and have given solo and chamber music recitals at the Royal Festival Hall, Kings Place, Wigmore Hall and St Martin-in-the-Fields. I began performing with the London Firebird Orchestra in February this year, playing first horn.

And what about your future ambitions?

My musical ambition is to have a varied playing career, whether in a symphony orchestra or in an orchestral pit.

Outside of music, my ambitions include travelling to as many different countries as possible and completing all of the recipes in Meera Sodha’s cookbooks!

What do you see as the value of an orchestra like London Firebird to younger professional musicians like yourself?

London Firebird Orchestra offers young musicians the chance to bridge the gap between study and the demands of professional life in a collegiate and supportive artistic environment.

It is also a great opportunity to cover basic repertoire. Some of my most memorable dates including Beethoven’s 5th and 7th symphonies with conductor George Jackson.

Merry Christmas and a happy new year!
Scroll to top