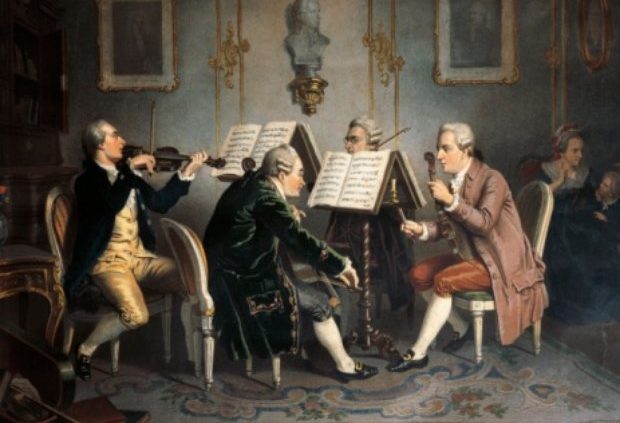 There are some surprises in store at Firebird’s next concert on 25 March including one of the most extraordinary moments in the musical repertoire in a symphony by the Austrian Composer Joseph Haydn.

Many of Haydn’s 106 symphonies were given titles including ‘The Paris’, ‘The Farewell’, ‘The Drumroll’ and ‘The Hen’. But Symphony No. 94 is popularly known as the Surprise Symphony. Why? Well the reason is something rather unexpected which happens during the otherwise gentle opening of the second movement.

Haydn was well known for being a bit of a musical prankster. For example, in his String Quartet in E flat (subtitled ‘The Joke’) there are false endings to try and catch the audience out!

And as for his Symphony No. 94 Haydn made a significant last minute alteration to the score on a whim for its London premiere on March 23, 1792. He altered the dynamics in bar 16 of the Andante giving an immense fortissimo chord which invariably jolts the audience out of any possible dozy moments! The music then returns to its original quiet dynamic as if nothing has happened. The episode ultimately earned for the work its everlasting nickname, Surprise Symphony.

Haydn had been in London just over a year and Londoners turned out by the thousands to watch him conduct premieres of his new works. Critics and audiences alike were generous with their praise. The critic from Woodfall’s Register wrote:

‘The third piece of HAYDN was a new Overture [i.e. symphony], of very extraordinary merit. It was simple, profound, and sublime. The andante movement was particularly admired.’

In Haydn’s old age, his biographer George August Griesinger asked him whether he wrote this surprise to awaken the audience. Haydn replied:

‘No, but I was interested in surprising the public with something new, and in making a brilliant debut, so that my student Pleyel, who was at that time engaged by an orchestra in London and whose concerts had opened a week before mine, should not outdo me…’

Towards the end of his career, Haydn actually reused the theme of the second movement into an aria of his oratorio The Seasons. The bass soloist depicts a ploughman whistling this tune as he works as if Haydn is poking fun at himself.
Pic: Haydn Joke

Since then other composers have reworked the joke in their own way. The American composer Charles Ives wrote a parody of the second movement in 1909, penning the words Nice little easy sugar-plum sounds under the opening notes. Donald Swann created a version of the Surprise Symphony with a few extra surprises thrown in for the humorous Hoffnung Music Festival.

So if you like surprises, join us on Sunday 25 March at Kings Place with Firebird’s Little Surprise in collaboration with the London Chamber Music Society

Composers of Tomorrow
Scroll to top